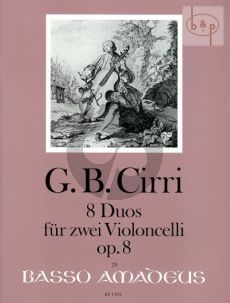 His contemporaries praised Giovanni Battista Cirri's works for elegantly fusing Italian and German instrumental styles. Emancipated in formal structure, they most attractively alternate between lyrical expression and rich, virtuosic passagework. The melodic balance between the parts comes naturally to cellist Cirri. Like the Sextet in D major, also published by Amadeus (BP 1274), these 8 Cello Duets brilliantly reflect this 'equal' approach. We present this convolute according to the undated first print, initiated by the author. Its title reads: Eight Duetts / for Two / Violoncellos / Dedicated to / His most Serene Highneßs the / Hereditary Prince of Brunswick Lunebourg& / Compos'd by / Gianbattista Cirri / Teacher to His Royal Highneßs the / Duke of Gloucester / Opera VIII. / London by John Johnston, for the Author. This first print contains numerous errors of notation, principally missing accidentals, which were easy to correct. Phrasing and especially dynamics, which are sparse and differ greatly between the parts, required some additions.