A Garland of Carols - Anthony Bolton

A Hommage to Britten / Upper Voices-Harp 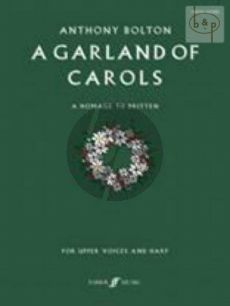 A Garland of Carols is a homage to Benjamin Britton's 'Ceremony of Carols'. Written by Anthony Bolton, best known as one of the UK's most successful fund managers, it includes a translation of the traditional Portuguese carol Beijai o menino, as well as original works such as Lanterns which evokes a barren winter landscape from which we are transported to a more mystical land in the middle section. Though originally written for trebles, the carols work equally well for female voices. The carols are written to be accompanied by harp, the part for which is available separately.