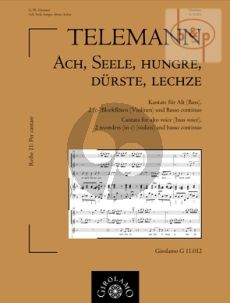 End of 1725 Georg Philipp Telemann published his cantata cycle bearing the title: 'Harmonischer Gottes-Dienst' which apparently was very successful. End of 1731, almost six years later, Telemann published the sequel: Fortsetzung / des / Harmonischen / Gottes-Dienstes; / oder / geistliche / Cantaten /über die gewöhlichen Sonn- und Fest-täglichen / Evangelien durchs ganze Jahr; / ... which again contained 72 cantatas for all Sundays and special feast days of the church year. The title alone reveals the possibility of various scorings. Two violins can in principle perform all instrumental parts. When the voice part has a tacit the instrumental parts are notated in cue notes. This will enable the keyboard instrument to take over the instrumental parts if necessary. A larger scoring is a further option. This is marked by 'tutti' and 'soli' in the parts indicating which passages can be performed with stronger and softer (solo voice) volume. When performing in a solistic setting 'tutti' and 'solo' are to be understood as 'forte' and 'piano'. The soprano part can also be sung by a tenor. The same applies to the alto voice, which can be replaced by a bass. The cantata presented in this edition 'Ach, Seele, hungre, dürste, lechze' derives from the 1731 cycle and is written for the 2nd Sunday after Trinity. The two parts marked with 'Flauto dolce' have the range a1ûd3 and d1ûb-flat2. Usually Telemann employs the higher part of the treble register when writing for the recorder. Hence one could conclude that here he had two tenor recorders in mind which alludes to a different idea of sound. The first part could be performed by a treble but this would probably not correspond to the composer's idea. Both parts can also be performed on traversos. The texts for the cantata cycle of 1731 are taken from passages from the volume 'Ruhe nach geschehener Arbeit' by Tobias Heinrich Schubart (1699û1747) published by Kissner, Hamburg 1733. Telemann must have known the lyrics long before they were published. This is not surprising since Schubart served as a preacher at St. Michaelis in Hamburg. The vivid and partially drastic language Schubart uses in his small religious dramas or operas seems a little dated. The message they bear is that there will be salvation in a world hereafter and that the present world represents nothing but a vale of tears. Telemann however succeeds to elevate the lyrics and their cryptic meaning by his ingenious hand. Thus they should be understood as a testimony of that period and not be rejected a priori. Nobody refrains from performing Bach's cantatas, which have similar texts. This edition is strictly in line with the edition published in 1731 which is kept at the Royal Library, Copenhagen, comprising a score and two instrumental parts. Additions made by the editor are indicated in the score. Translation: J. Whybrow Celle, August 2012, Franz Müller-Busch.