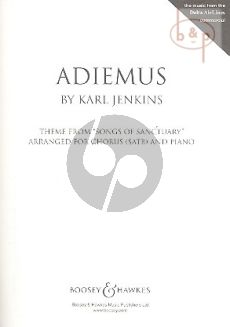 The music from the million-selling album, featured on the Delta Air Lines TV commercial. Adiemus combines classical and ethnic influences to create a haunting, tribal sound. Songs of Sanctuary is an extended choral-type work based on the European classical tradition, but where the vocal sound is more akin to ethnic or world music. The idea was to have some thematic unity within the work as a whole, rather than a collection of disparate pieces in song form. The structures of Songs of Sanctuary are influenced, in the main, by classical form, e.g. modified rondo, ternary, da capo aria. This is of extra importance because of the lack of lyric message that sustains conventional song form. The text was written phonetically with the words viewed as instrumental sound, the idea being to maximise the melisma (an expressive vocal phrase) by removing the distraction, if one can call it that, of words. The sound is universal, as is the language of music.