composed and arranged by Florian Brambock 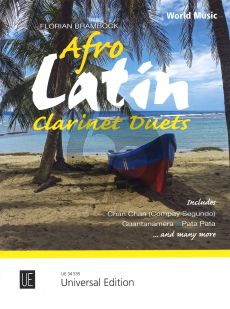 When you explore the contents of this book you will immerse yourself in the exotic world of Afro-Latin-Jazz, an exciting form of music fusing African and Caribbean dance rhythms with American Jazz.

Latin music has roots not only in Central and South-American folk music but is also strongly influenced by music from Africa. In particular the rhythmic richness and exotic flavour of Afro-Latin-Jazz can be traced to the traditions of African music, which left its characteristic mark during the colonial period in America.

These easy to moderately difficult clarinet duos serve as an introduction to the genre presenting some Latin and African grooves. Original compositions as well as arrangements of well-known melodies will introduce new sound and rhythmic elements to help develop your technique and ensemble playing. Above all however, this lively and varied music should be fun!