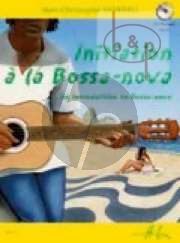 Bossa Nova originated in Rio de Janeiro during the 1950s. It emerged from the blend between traditional samba rhythms and the complex jazz harmonies of that period. Though numerous musicians contributed to its 'gestation', the principal founders were the pianist-composer Antonio Carlos Jobim and the singer-guitarist Jocio Gilberto. Popularised in France thanks to Marcel Camus'film Orfeu Negro, bossa nova rapidly encircled the globe, due in particular to recordings by A. C. Jobim and Joâo Gilberto with saxophonist Stan Getz. Described by A. C. Jobim himself as 'the gentle, white version of samba', it is the very sophisticated and 'cool' counterpart of samba, which is above all dance and carnival music. But bossas are sambas... The same rhythms are used, but played in a more repetitive and suave manner, on more elaborate melodies and harmonies. In the 1920s, Brazilian guitarists created a particular way of accompanying songs. As with other South American styles, the guitar (and thus the right hand) should be considered as 'harmonised percussion' (dixit Toquinho, one of the great guitarists of the genre). The style no doubt developed from the osmosis between guitar and percussion. In samba, binary music in 2, the surdo (a sort of large drum) plays on the beat (first a short closed stroke, then a long low open stroke). On the guitar, the thumb takes this role, while the right hand fingers generally reproduce the rhythm of the tambourim (small hand drum, hit with a stick) or the agogos (two metal bells welded together and tuned to a fourth). The pandiero, or 'Basque drum' in French, and the ganzé (or shaker), unify the steady beat of the surdo with the rhythmic freedom of the tamborim or agogos, by weaving a carpet of accented semiquavers.