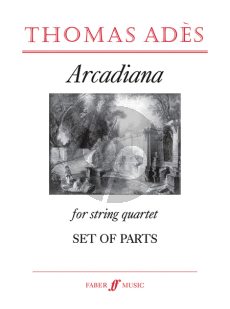 Composed in 1994 and now firmly established as part of the contemporary string quartet repertoire, Arcadiana is one of Thomas Adès’s early masterpieces. Six of its seven movements evoke various vanished or vanishing idylls. The odd-numbered movements are all aquatic. I might be the ballad of some lugubrious gondolier; III takes a title and a figuration from a Schubert Lied; in V a ship is seen swirling away to L’Isle Joyeuse; VII is the River of Oblivion. The second and sixth movements inhabit pastoral Arcadias, respectively: Mozart’s ‘Kingdom of Night’, and more local fields. The joker in this pack is the fourth movement, the literal dead centre: Poussin’s tomb bearing the inscription ‘Even in Arcady am I’.

The Score can be found here