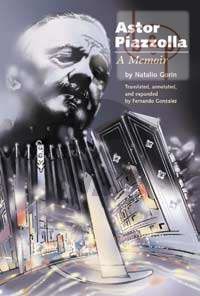 Astor Piazzolla, brilliant, iconoclastic tango musician and composer, has become a national hero in Argentina and a cult figure for classical and jazz lovers worldwide, but only after a lifetime of controversy and struggle.

The outspoken, headstrong Piazzolla told his story to journalist and longtime fan Natalio Gorin in the spring of 1990 in a series of frank interviews.

Among the firsthand observations of others who knew Piazzolla well are those of his lyricist Horacio Ferrer, his fellow musicians, and his colleagues. Translator Fernando Gonzalez, an Argentine native and American popular music critic who covered Piazzolla's career in the United States, has annotated the Amadeus edition for the widening audience that is rediscovering Astor Piazzolla.

From Chapter 11, Self Portrait

I discovered music when I was eleven years old. The apartment building where we lived in New York City was very big. In the back there was a hall and a window. One summer afternoon I was hanging out, without much to do, and I heard a piano playing Bach, although that was something I learned later.

At that age I didnÆt know who Bach was, but I felt as if I had been hypnotized. It is one of the great mysteries of my life. I don't know if it was Johann Sebastian Bach or one of his sons. I believe I have bought all Bach's recorded works, but I could never find that music again. That pianist practiced nine hours a day: three hours of technique in the morning, three hours of Bach in the afternoon, and three at night, trying out repertoire for his concerts. He was Hungarian. His name was Bela Wilda, and soon he became my teacher.

My father and I went over to knock on his door. I'll never forget that moment. I was dazzled by the grand piano and the Camel cigarettes he smoked, which gave out a deep tobacco smell. Neither my parents nor he had much money. We had common problems. So I started studying with my teacher thanks to an arrangement: my mother gave him free manicures and twice a week would send him an enormous bowl of pasta. Hunger also knocks at the doors where good music is heard. I never went hungry, I was that lucky, but I know a lot about going around without a nickel in my pockets.