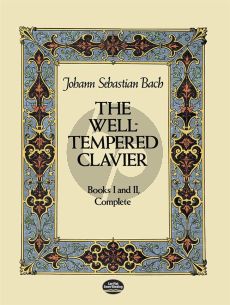 His art was of an encyclopedic nature, drawing together and surmounting the techniques, the styles, and the general achievements of his own and earlier generations and leading to a new perspective." — Grove's Dictionary of Music and Musicians.

This informed assessment of the genius of Bach's works can be applied with greatest accuracy to The Well-Tempered Clavier. This highly influential work is monumental in the history of Western music. It represents not only the culmination of Bach's own maturation process, but also the galvanization of the emerging style and structure of modern keyboard music.

The grace and fecundity of The Well-Tempered Clavier have thrilled audiences, musicians, and composers for centuries. Mozart, when rapidly advancing to the height of his mastery, had but to read a manuscript copy of The Well-Tempered Clavier and his style developed a new polyphonic richness and depth of harmony. Beethoven studied all the accessible works of Bach profoundly (including The Well-Tempered Clavier) and frequently quoted them in his sketchbooks, often with direct bearing on his own works. Chopin is nowhere more characteristic than when he shows his love of The Well-Tempered Clavier in his Etudes and Preludes. It was Schumann who, in a series of maxims for young musicians, said "Make The Well-Tempered Clavier your daily bread."
This remarkable volume contains all 48 preludes and fugues, from Books I and II, in all major keys, reproduced directly from the authoritative Bach-Gesellschaft edition. The fine engraving is beautiful, clear, and easy to read. These elegant pieces, which vary in difficulty, are available complete in one low-cost, convenient Dover edition.