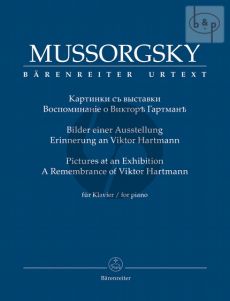 The catalyst for the piano cycle 'Pictures at an Exhibition', composed in 1874, was a memorial exhibition held that year for the artist and architect Viktor Hartmann. He was a friend of Mussorgsky who had died in 1873. It is not only Mussorgsky's most important contribution to the piano repertoire, but through its relationship to Hartmann's pictures and the translation of this idea into a composition, the cycle holds a unique place in 19th century piano repertoire. Scholarly-critical Urtext edition based on all the sources Detailed foreword (Ger/Eng) and suggestions on performance practice Clear musical layout Christoph Flamm, an internationally renowned specialist of Russian music of the 19th and early 20th centuries, has edited this Urtext edition for Bärenreiter. He has re-evaluated the sources and in the process has discovered surprising variant readings of the well-known musical text. The edition will meet the demands of advanced piano students, teachers and pianists.