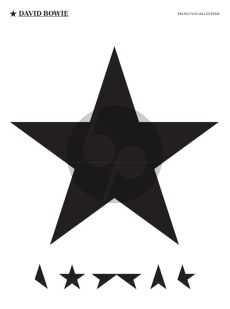 Every song from the late, great David Bowie's number one album Blackstar (★), arranged for Piano, Voice and Guitar, with full lyrics, chord symbols and chord boxes. The album was released just two days before Bowie tragically passed away, and was hailed by critics and audiences as one of his greatest, taking his music in new directions as he had done for his entire life. The album was a surprise release to many fans, with the first single Blackstar hinting at a completely new direction, venturing towards jazz music. A music video for the second single, Lazarus, was released in January 2016, the day before the album. The video shows Bowie in a hospital bed, with a bandage covering his eyes before walking into a wardrobe at the end. Bowie passed away two days after Blackstar was released, to the sadness of the entire nation. Much of the album relates to life and death, and the lyrical themes have been interpreted as a "parting gift" for fans before his death. The songs have been almost universally acclaimed for their music and lyrics, as well as the ultimate artistic swansong for a man whose life was exceptionally creative and boundary-pushing. With this Blackstar sheet music, you can learn to play David Bowie's last album in all its glory, for Piano, Vocal and Guitar. 56 pages.