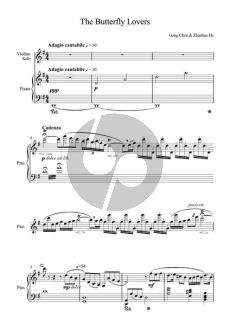 The Butterfly Lovers was written by He Zhan-hao and Chen Gang in 1959 while they were students of the Shanghai Conservatory. Musically, the concerto is a synthesis of the Eastern and Western traditions although the melodies and overall style are derived from the opera of Shanghai.

The original version of the concerto has a marked traditionally oriental colour. In the spirit of the Shanghai opera, the concerto, as a whole, conveys on a musical level aspects of a traditional Chinese painting in its light and calm mood.

Chen later revised the original score in an attempt to intensify the dramatic power of the music by further contrasting both the tempi and the dynamics of the concerto. The result is that the later version sounds far more Western and further removed from the Shanghai opera which inspired its antecedent.

Although the concerto is written in sonata form it is also strongly programmatic. The narrative is based on Chinese folklore and tells the story of the lovers Liang Shan-po and Zhu Ying-tai. Liang Shan-po has been studying with Zhu Ying-tai, disguised as a boy, for many years during which Ying-tai has fallen in love with Shan-po who is ignorant of her true gender. One day, Ying-tai is summoned home, where her family has arranged for her to marry a wealthy neighbour. She is, therefore, forced to part from Shan-po, in a tender scene by a bridge.

After a time, Shan-po, greatly missing his companion, attempts to visit Ying-tai's house where he finds out from a servant that Ying-tai is a girl and about to be married. Only then does he understand what Ying-tai had so often tried to tell him, and in his bitter despair he falls ill and dies.

On learning of the death of Shan-po, Ying-tai visits his grave and in her grief begs his tomb to open. There is a clap of thunder, the tomb breaks open and Ying-tai leaps into the grave, from which the two lovers emerge as butterflies and fly away together, finally reunited.

Techniques of the Chinese string instrument, the er-hu, are used by the violin in this concerto and this serves to emphasise the Chinese character of the work.