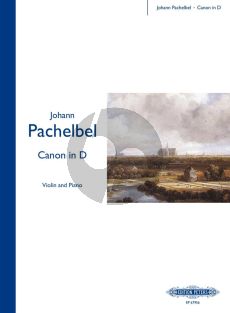 While Pachelbel has been most admired as a composer of organ works and Lutheran church music, his Canon in D has long been one of his most celebrated compositions. It combines two time-honored compositional devices. The first of these is of course the canon, a procedure whereby a melody in one part is strictly imitated by one or more other parts; a round (such as, for example, Frère Jacques) is a type of canon. The second device involves a short bass line (refeered to as a ground bass) that is repeated constandly, over which the composer writes continuous variations. In its original form, the work consists of an initial statement of an eight note ground bass, followed by27 variations in strict canonic style for three violins above that bass. In addition to these four essential parts, an appropriate harmonic background would have been improvised on harpsichord, lute or organ.

In the present arrangement, Pachelbel's note values have been doubled for greater ease of reading, and the work's canonic structure has been somewhat modified in order to make it more readily playable by violinists and pianists at an intermediate level. Since dynamics, bowing indications, articulations, and slurs were not customarily provided by composer of the Baroque era, the arranger and the editor have added them here, as well as a metronome indication and a few cadential trills. Obviously these editorial additions should be regarded only as suggestions.