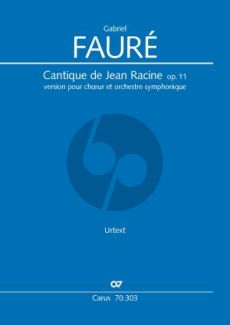 Carus 70.301/10, which is part of the material associated with this piece, can be used as the choral score. Gabriel Fauré composed the Cantique de Jean Racine in 1865, the prizewinning work for the completion of his musical training. The composer expanded the original scoring for choir and organ by adding a string accompaniment; the version with orchestra was first performed in 1906. As a text Fauré chose a French adaptation by Jean Racine of the Latin hymn “Consors paterni luminis.” The Cantique already displays the characteristics of an expressive choral setting typical for Fauré, as well as the finely worked out orchestral accompaniment, and together with the Requiem, composed considerably later, it is among the most popular works of the composer. Scoring: Coro SATB, 2 Fl, 2 Ob, 2 Clt, 2 Fg, 2 Cor, 2 Vl, Va, Vc, Cb, Arpa. Language deutsch/französisch. Key Des-Dur.