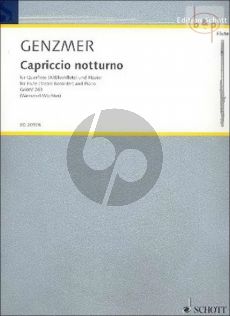 The wide-ranging oeuvre of Harald Genzmer (1909-2007) is completed by a large number of small-scale chamber music works. In the last stage of his creative life, the flute played a major role. It was in that period that he composed Capriccio notturno for flute or treble recorder and piano, which goes back to his reading Friedrich Nietzsche's Thus Spake Zarathustra whom Genzmer admired very much. Genzmer begins his work with Nachtlied from the second part of Nietzsche's work, using it as a motto. The flute part of Capriccio notturno lies comfortably on the flute, using the possibilities of the treble recorder. In both cases, as in the piano part as well, the demanding musical context requires experienced performers: a work for both the concert stage and upper school classes or youth competitions.