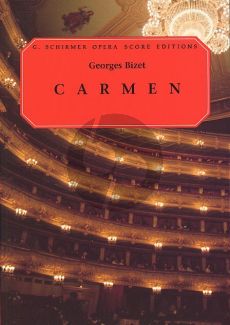 lthough almost unanimously condemned by contemporary Parisian critics for its overt sexuality and graphic final scene, Carmen ultimately reached the public in a way that perhaps no other opera has. Bizet's aim (with Meilhac and Halevy, who wrote the libretto) had been to transform the flaccid, moralistic bourgeois genre of opéra comique into a more sophisticated type of staged work, and he seems to have suceeded in Carmen. Each character has a musical significance and a unique expressive idiom, the ultimate example being the dangerous, exotic, sensual Carmen herself, depicted by an exotic and sinewy chromatic motive that also implies the insurmountable power of fate. In a classic plot device, she is contrasted with the 'good girl' of the opera Micaela, whose main aria is set in the ternary form of the elevated bel canto French Grand Opera aria to imply her traditionally 'ladylike' retiring nature. Don José's musical styles reflect different levels in his descent from dutiful soldier to the underworld of obsession. This is the Schirmer edition of the Vocal Score with an English translation by Ruth and Thomas Martin.