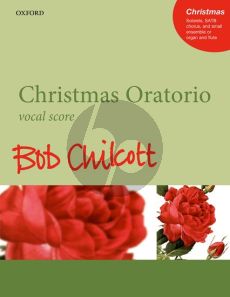 For SATB and soloists (M-S, T, & B), with organ and flute or small ensemble
With this majestic work Chilcott takes on a landmark of the choral repertory, the Christmas Oratorio. Words from St Luke and St Matthew are intertwined with 16th-19th-century poetry to create a compelling retelling of the Christmas story. Five hymn texts are set to new, original melodies that take their place among the season's tradition of great hymnody and enable the audience or congregation to join in with the choir. As in the St John Passion, much of the narrative is presented by a tenor soloist in the role of Evangelist, with focal points such as the Magnificat and Nunc dimittis and Rossetti's 'Love came down at Christmas' taken by mezzo-soprano and bass soloists. The chorus is integral to the storytelling, assuming small character roles and taking centre stage in two unaccompanied movements. A solo flute characterizes the angels, and the mellow tones of the brass ensemble evoke a sense of festive tradition.

This setting of the Christmas story begins with the visitation of the Angel Gabriel to Mary as told in the familiar words of St Luke's Gospel. We hear of the journey of Mary and Joseph to Bethlehem and of the birth of the baby Jesus. After hearing of the birth from an angel, the shepherds come to visit the newborn child. We then hear of the journey of the three wise men, as told in the Gospel of St Matthew, and also how Herod the king tries to win their trust. The piece ends with the presentation of Jesus to the old man Simeon in the temple.
As this work was written for the Three Choirs Festival and was first performed by the three Cathedral Choirs of Gloucester, Worcester, and Hereford in Gloucester Cathedral, it seemed appropriate to include settings of both the Magnificat (Mary's Song) and the Nunc dimittis (The Song of Simeon.) These canticles have been sung or spoken every day at the service of Evensong for hundreds of years in cathedrals and churches across the land. They are focal points in the liturgy of this service, as they are also in the story of the birth of Jesus as written in the Gospel of St Luke. I have also included hymn settings, to be sung by both choir and congregation or audience, that punctuate various points in the story, such as the foretelling of the birth of Jesus, the angel appearing to the shepherds, and the journey of the three kings to Bethlehem. The piece, which also includes settings for the choir of well-known Christmas texts by Percy Dearmer, Christina Rossetti, and Robert Herrick, is bookended by two different translations of the fifteenth-century German hymn 'Es ist ein Ros entsprungen.' The medieval image of a rose depicts the prophesy of Isaiah who declared: 'There shall come forth a rod out of the stem of Jesse, and a branch shall grow out of his roots'.