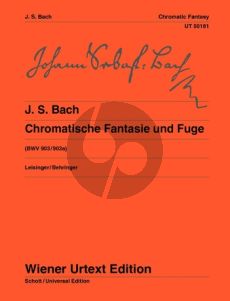 This new Wiener Urtext Edition presents Bach's Chromatic Fantasy not just in the traditional form but contains two additional versions, one late and one early. The early version is based on sources previously ignored and the late version is thought to be probably a late revision by Bach himself. The introduction and critical commentary give a detailed history and further background detail. The performance notes provide information for stylistically correct interpretation on the harpsichord as well as on the piano.