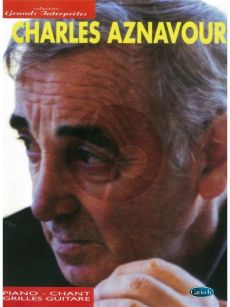 This volume contains 43 songs by the French and Armenian singer/songwriter Charles Aznavour in arrangements for Piano, Voice and Guitar.

Born Shahnour Varinag Aznavourian in Paris on 22 May 1924, Charles Aznavour has enjoyed a prolific career, writing around 1000 songs and releasing more than 100 records. Writing and performing his songs in a several different languages (French, English, Italian, Spanish, German, Russian, Armenian, Neapolitan), Aznavour has had successes all around the world and is perhaps best known in the UK for his 1974 hit 'She' as well as 'Dance In The Old Fashioned Way'.