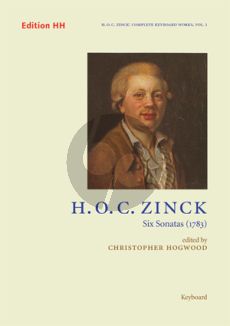 The German composer and instrumentalist Hardenack Otto Conrad Zinck (1746-1832), after early music lessons with his father, studied in Hamburg with C. P. E. Bach, who held him in high esteem. Between 1777 and 1787 he was a flautist and keyboard player at the Duke of Schwerin's court in Ludwigslust, and also began to devote himself to composition. He then moved to Copenhagen, where he was first accompanist in the court chapel, worked as an organist and teacher and in 1800 founded a singing academy. As a composer, Zinck was particularly influenced by the music of C. P. E. Bach. His output includes sacred music, cantatas and lieder (to both German and Danish texts), a Danish Singspiel, chamber music, and numerous keyboard works, including the notable Six Keyboard Sonatas of 1783.