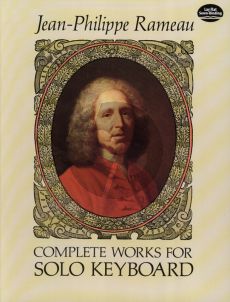 Treasury of 63 works for keyboard by major French composer, harmonic innovator. Published between 1706 and 1741, they are reprinted in this volume from the authoritative edition edited by Camille Saint-Saëns. Included are such well-known pieces as: "Musette en Rondeau," "Tambourin," "Les Niais de Sologne," "Les Cyclopes" and "La Poule." Sustained tone makes these pieces especially well-suited to modern piano.

A contemporary of Bach, Handel, Scarlatti, and Telemann, Jean-Phillipe Rameau (1683–1764) was a notable theorist and innovator and the preeminent French composer of his day. The depth and power that characterize his music are in ample evidence in this volume of all 63 of Rameau's works for keyboard, published between 1706 and 1741, including such well-known pieces as "Musette en Rondeau," "Tambourin," "Les Niais de Sologne," "Les Cyclopes," and "La Poule." The music is reproduced here from the important and well-produced edition of Rameau's keyboard works edited by Camille Saint-Saëns. Because the composer attempted to use his keyboard as a sustaining instrument, these pieces lend themselves especially well to performance on modern pianos. Now today's musicians can enjoy Rameau's complete oeuvre for solo keyboard in this inexpensive high-quality edition.