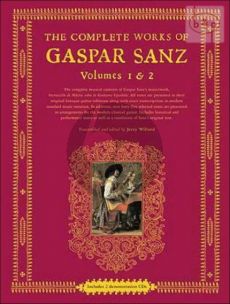 Gaspar Sanz was one of the most celebrated guitarists and composers of his time. In 1674 he published a method for the baroque guitar. This method has been lauded by guitar aficionados and serves as a significant historic work. Written in Old Spanish with the tablature system of its day, this method has only been available to the few who would meticulously research and decipher its hidden meanings. Available here is the complete manuscript of Sanz's legacy, which has been translated into English and the tablature arrangements now include standard music notation. Jerry Willard has also included arrangements for the modern guitar and performs selections from this body of work on both the baroque and modern guitar which can be found on the accompanying CDs.