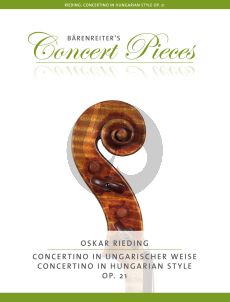 Bärenreiter's Easy Concertos is a new series of the most popular short concertos for violinists who want to begin performing in public. The series begins with works by the composers Rieding, Seitz and Vivaldi which are clear favourites amongst the first solo concertos played. The editions include a solo violin part and a piano reduction for the accompanist.

The series is edited by Kurt Sassmannshaus, the internationally renowned violin teacher and co-author of the Sassmannshaus violin school tradition. His forewords introduce these little gems and include tips to ensure successful first concerts. These volumes form an ideal continuation of the Sassmannshaus school editions and can be used in parallel from volume three onwards: They can also be used to supplement any violin method. This series will be continued and will introduce students to more demanding repertoire with an increasing level of difficulty.