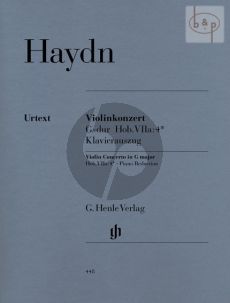 Three violin concertos by Joseph Haydn survive, of which the ones in C major and A major were written at the court of Prince Esterhazy. The violin concerto in G major Hob. Vll:4 was probably composed in the early 1760s, before his appointment by the prince. It thus comes as no surprise that it is very different from the other two concertos; the solo violin part hardly goes beyond the third position, and the focus is more on lyricism than virtuosity.

For (younger) violin learners the work thus offers a good opportunity to engage with Haydn the composer for the first time. Our Urtext edition is based on the Haydn Complete Edition, also published by G. Henle Verlag. The extensive preface includes a discussion of authenticity, among other things. The edition is rounded off by sophisticated string bowing and fingerings by Kurt Guntner, along with cadenzas created by Franz Beyer.