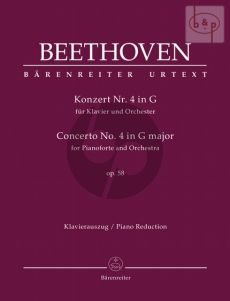 The autograph to Beethoven's Piano Concerto No. 4 is lost. For every new edition which has appeared during the course of time there have been only two authentic sources to draw upon; the copyist's manuscript of the score with Beethoven's own corrections and the first edition in parts from 1808 which was published in Vienna and which contains a few revisions dated after the aforementioned manuscript. Though no new sources have been available for this new edition, numerous editorial emendations which have prevailed in all previous editions (even Urtext editions) have now been corrected. Thus, this new Bärenreiter Urtext edition presents Beethoven's famous work in the clarity which it deserves. With numerous corrections Piano reduction with a separate solo piano part