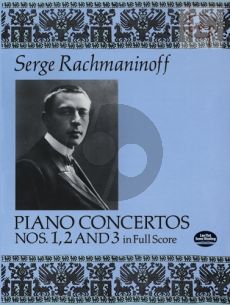 Just as Serge Rachmaninoff ranked among the greatest pianists of the 20th century, his compositions for piano and orchestra won him an important position among modern composers. The major works that made his reputation include the first three piano concertos, reprinted here in a single volume from authoritative full-score Russian editions.Reprint of the State Music Publishers, Moscow, 1965 edition.