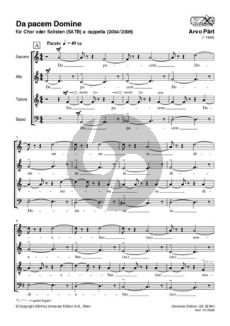 Arvo Pärt wrote the prayer of peace "Da pacem Domine" to fulfil a commission from Jordi Savall. He began to set this ninth-century Gregorian antiphon two days after the Madrid bombings on 11 March 2004 as his personal tribute to the victims. Since then "Da pacem Domine" has been performed every year in Spain to commemorate the victims of this terrorist attack. Even while originally composing this four-voice piece, Pärt made allowances for variable scorings. As a result, it exists in several versions, not only for voice but also entirely for instruments. Wolfgang Sandner.