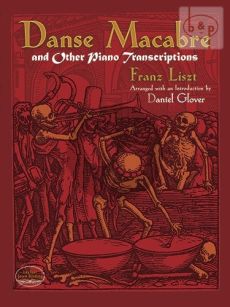 In addition to his skills as a composer and performer, Liszt is famed for his genius in transcribing orchestral works for piano. Thanks to his efforts, pianists in the era before sound recordings could learn from the vast repertoire of orchestral, operatic, and vocal literature. This original collection offers modern-day pianists insights into Liszt's peerless gift for transferring sonorities from one medium to another as well as the opportunity to develop a deeper familiarity with several orchestral masterpieces. Suitable for intermediate-level and advanced pianists, these selections include Berlioz's 'Dance of the Sylphes' from The Damnation of Faust, 'March of the Pilgrims' from Harold in Italy, 'March to the Scaffold' from Symphonie Fantastique, and L'Idée fixe, Andante amoroso, also based on a theme from Symphonie Fantastique. Other composers' works include Mendelssohn's 'Wedding March and Dance of the Elves' from A Midsummer Night's Dream, Saint-Saëns' Danse Macabre, and Liszt's solo piano rendition of his own Totentanz (Dance of Death). 208 pages.