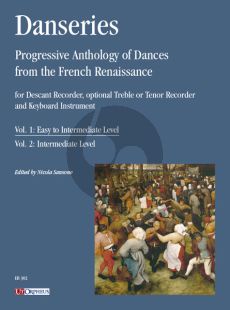 This two-volume anthology has been designed on the living experience of teaching as material intended for descant recorder players at the beginner and intermediate level.

The progressive order allows an approach to ensemble music, starting from the use of just the notes of the left hand, and proceeds with the acquisition of the new positions reaching the chromatic range of an octave and a sixth.

The repertoire used consists exclusively of dance music from the French and Flemish area contained in various collections published between 1530 and 1583 by various composers and editors. This choice was dictated by a number of different factors: the extremely clear and symmetrical metric and formal schemes typical of the Renaissance dance form, with due and useful exceptions, help to understand the concept of musical phrase; the use of coded and recurring rhythmic formulas makes it possible to perfect the rhythmic division; harmony based mostly on the basic steps helps to form an experience of listening, intonation and understanding of the main harmonic functions.

No less significant are other elements, such as variety in the length of the pieces, from a few bars up to several dozen, which favours the development of concentration and attention, with the same technical difficulties. Above all, however, the vastness of the repertoire, more than 500 compositions, makes it possible to choose and order the pieces with an idea of ​​technical and musical progressiveness comparable to that of a method.

The edition is produced in such a way that all the pieces can be performed in four parts except for some in five parts, in different ensembles. The most basic is in reduced three-part form of descant, tenor and bass, the latter two are given respectively to the right and left hand of the keyboard player. Since recorders play at the octave above, the tenor part is also transposed in the same way to make the sound of the three upper voices homogeneous, while the bass retains its original range. It is also possible to enlarge the group to play the full four voices with the addition of an alto or tenor recorder playing the alto part, available in the separate part, and two more instruments, tenor and bass recorders or others, performing the respective lines alone or doubling with the keyboard.