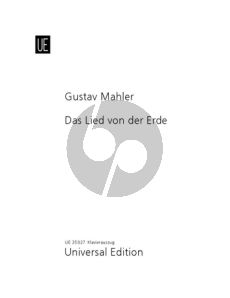 ‘Death, towards whose mysteries his thought and perception had so often taken their flight, had suddenly come in sight. The world and life now lay in the sinister shadow of its nearness.’ Such was Bruno Walter’s assessment of Mahler’s recent misfortunes in the autumn of 1907. As is well known, during the first half of that year Mahler was shaken by three crises that would alter his life profoundly. In the spring, after ten extraordinary years as director of the Royal and Imperial Court Opera in Vienna, he resigned, ‘because I can no longer endure the rabble’. On 21 June 1907 he signed a contract for a new position in the New World, at the Metropolitan Opera in New York. Nine days later the ‘summer composer’ retreated as usual to his country home at Maiernigg on the Wörthersee. But within less than a fortnight his beloved elder daughter had perished from the rapid onset of scarlet fever and dyptheria. Soon thereafter Alma Mahler fainted from grief and fatigue, and the local doctor was summoned to her aid. He also examined Mahler, and discovered a cardiac valvular defect, subsequently confirmed by a specialist in Vienna. This condition was not in itself life-threatening, but it had long been known that there was a connection between valvular defects and bacterial endocarditis – a disease that was invariably fatal before the discovery of antibiotics, and which would lead to Mahler’s death four years later. The Mahler family fled Maiernigg, spending the remainder of summer 1907 in the tiny hamlet of Schluderbach (near Toblach, in South Tyrol).

According to Alma Mahler’s memoirs, ‘years ago’ an old friend of her family (Dr. Theobald Pollak) gave Mahler ‘the newly translated “Chinese Flute” (Hans Bethge). These poems pleased Mahler enormously, and he set them aside for later. […] now these immeasurably sad poems came back to him, and already in Schluderbach, during long, lonely walks, he sketched the orchestral songs that would become “The Song of the Earth” one year later!’ But Alma’s writings are frequently mistaken (sometimes intentionally so). Alfred Roller, Mahler’s chosen stage director at the Opera who visited him in Schluderbach, reports: ‘This summer remained without artistic fruit.’ Moreover, the Börsenblatt für den deutschen Buchhandel announced the publication of Bethge’s Die chinesische Flöte only on 5 October 1907, well after Mahler had left the Tyrol for Vienna. Even had he received an advance copy (which seems unlikely), Mahler’s later correspondence plus the dated manuscripts of his new work – as yet untitled – indicate that it was composed largely if not entirely during the summer of 1908. It seems curious that Mahler should have found texts so well suited to his purpose in poems from the 8th century T’ang dynasty. But these verses are not ‘newly translated’; rather, they are reworkings of earlier German and French translations, twice and thrice removed from the original Chinese. Appropriately, Bethge calls them ‘Nachdichtungen’ (paraphrase poems). Bethge was no Sinologist, but rather an ‘empathetic aesthete’ (Einfühlungsaesthetiker); in his view, ‘Translating a poem literally is not what matters; what matters much more is to enable the spirit, the style, the melody of a poem to arise somewhat anew in the foreign language.’ The result in many respects resembles German late 19th century poetry with added oriental overtones. From this collection of 83 paraphrases of 38 poets, Mahler ultimately selected seven and shaped them into an allegory of transitory existence merging into eternity. And as he had done with the Wunderhorn- and Rückert-Lieder, he retouched the poetry to serve his own expressive purposes (most notably, the rapturous concluding lines of Der Abschied are his own, beginning with ‘Still ist mein Herz, und harret seiner Stunde!’ [Still is my heart, and awaits its hour!]). Nevertheless, the oriental impetus is inherent in Das Lied von der Erde through its Yin-Yang polar dynamism of opposites – night / day, autumn / spring, youth / death, intoxication / meditation, and in the distribution of the singing, high/low (usually tenor / alto; see below). Additionally, the anhemitonic pentatonic scale, which is the most common mode of pitch organization in Asian music, is motivically prominent in every movement, and Mahler draws as well upon the improvisational practice of heterophony (the ‘indistinct unison’, as Adorno termed it).

In the summer of 1908 Mahler found it extremely difficult to resume composing, as two poignant letters to Bruno Walter attest. On 18 July he writes: ‘But, without here trying to explain or describe to you something for which there are perhaps no words at all, I shall only tell you that quite simply at a stroke I lost all the clarity and reassurance that I ever achieved; and that I stood vis-à-vis de rien [face to face with nothing] and now at the end of a life I must learn to walk and stand as a beginner. –’ In particular, his doctors’ restrictions against physical activity, including his customary vigorous walks, left him miserable: ‘I can’t work at a desk. For my inner activity I need outer activity. […] I confess – superficial though it seems – this is the greatest calamity that has ever befallen me. I must absolutely begin a new life – and in that I am also a complete beginner. –’ Yet he successfully accomplished this difficult transition. In early September, just over six weeks later, he could report to Walter: ‘I was very diligent (from which you can gather that I’ve fairly well “gotten used to things”). I myself do not know how to express what the whole thing might be called. A beautiful time was granted me, and I believe it is the most personal thing I have yet created.’

According to several contemporaries, Mahler’s reluctance to give this latest composition a title stemmed from a superstitious fear of a Ninth Symphony – the last of the genre for both Beethoven and Bruckner. Yet there were other considerations as well: The work is an extraordinary fusion of song and symphony, and as Mahler had done with all but one of his lieder since 1892, he wrote it in both keyboard and orchestral versions almost simultaneously. The sources surviving from the compositional process are listed in the table below.

Finally during the winter of 1909–1910 Mahler entitled the work Das Lied von der Erde on the same sheet of paper where he assigned the much-feared number 9 to the symphony he had completed the previous summer. At that point movements 1, 3, and 5 were allotted to the tenor voice, while 2, 4, and 6 were designated ‘für Alt’ (for alto), just as in the fair copy of the full score. Mahler himself wrote the title page found in the Stichvorlage (printer’s manuscript), as follows: “Das Lied von der Erde“ / Eine Symphonie / für eine Tenor- und eine Alt oder Baryton-Stimme / und Orchester / von / Gustav Mahler. (‘The Song of the Earth’ / A Symphony / for a Tenor and an Alto or Baritone Voice / and Orchestra / by / Gustav Mahler.) It is clearly evident, however, that ‘Baryton’ is a later addition to the page, as also is the annotation at the entrance of the voice in the second movement: ‘(kann eventuell auch von Baryton übernommen werden[)]’ (could possibly also be taken over by a baritone).

Mahler did not live to complete Das Lied von der Erde or the Ninth in his usual manner, via performance and subsequent meticulous retouchings. The orchestral score, which appeared on 1 April 1912, was prepared for publication in consultation with Bruno Walter by Josef Venantius von Wöss, chief music editor of Universal Edition. For unknown reasons, Mahler abandoned his own piano version of the work; his contract with Universal Edition of 21 May 1910 stipulates that the publisher was obliged to issue a piano reduction for two hands. Mahler had been very satisfied with the piano-vocal score of his Symphony Nr. 8 made by Wöss, whose reduction of Das Lied von der Erde (UE 3391) was available on 4 November 1911, prior to the premiere. Bruno Walter introduced the work to the world on 20 November 1911, almost exactly six months after Mahler’s death, as part of a two-day memorial celebration in Munich. Since then it has been widely regarded as the composer’s finest masterpiece – ‘the most Mahleresque of his works’, as Bruno Walter appropriately characterizes it.