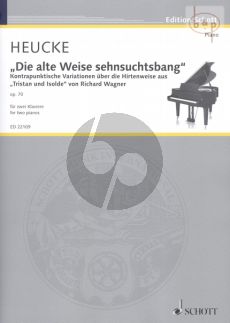 In 2012, I composed a set of variations (originally for orchestra and subsequently arranged for two pianos in 2013 ) based on one of Wagner's most inspired and haunting melodies, the 'alte Hirtenweise' [old shepherd's song], an extended cor anglais solo at the start of Act III of Tristan and Isolde. This seemingly simple, yet deceptively complex melody was my starting point for an expansive fantasy in which I explore the potential of the melodic elements for variational development. The individual motifs are transformed and reconstructed in eight extended movements making frequent use of polyphony and are repeatedly interrupted by the sounding of the original theme. The work concludes with a languid coda at a great distance from the themes of salvation and Liebestod. (Playing Score) (2 copies needed for performance. Stefan Heucke