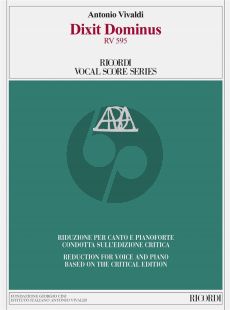 The Dixit Dominus RV 595 shares a key and some further characteristics with the better-known setting of the same psalm, RV 594, but differs from it markedly: first, in being scored for an undivided ensemble (i.e., not “in due cori”): second, in belonging to Vivaldi’s first period of sacred music composition, around 1715, rather than to a later period. There are stylistic parallels, too, with Vivaldi’s two Gloria settings, RV 588 and RV 589. Three of the eleven movements making up RV 595 use borrowed material, which in two instances is taken from movements by unknown composers in Vivaldi’s own collection, and in one instance (heavily disguised), from a published madrigal (1705) by Antonio Lotti. The borrowings are absorbed extremely well into the fabric of the setting and do not disrupt its well-unified character. Among the high points of RV 595 are its opening pair of moments – the first bustling and the second poignantly reflective – and the fourth movement, “Tecum principium”, where two obbligato cellos enter into dialogue with two sopranos. This Dixit Dominus, preserved uniquely in Prague, ranks among Vivaldi’s finest large-scale sacred vocal compositions. The Introduction and Critical Commentary for this vocal score are based on the Critical Edition by Michael Talbot published in 1993. Vocal score by Antonio Frigé. 88 pages.