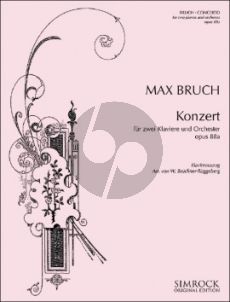 Max Bruch wrote his Concerto for two pianos in 1912 for an American piano duo, who only ever performed a cut down version. It was not until 1976 that the original version was released. The piano reduction by Wilhelm Brückner-Rüggeberg is now available in this new edition and is also available with additional separate solo parts for both piano parts. Bruch's pianistic, powerful late arrival reflects echoes of Bach and Brahms. New editon suggested and supported by Katia & Marielle Labéque. Duration: 26 min.