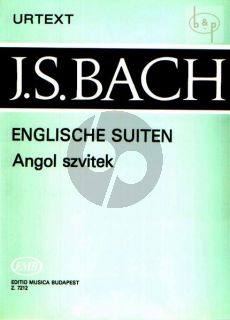 The name 'English Suites' did not originate with Bach, and up to now its origin could not be clarified. In his Bach biography Forkel mentions that the composer wrote the suites to fulfil an English commission. It is a much more likely assumption, however, that Bach derived inspiration for his suites from studying certain English models. A stylistic relationship, and indeed, certain thematic identities can be pointed out between the English Suites and the suites of the French composer, Dieupart, who lived in London. The piano suites of Handel, published in 1720, shortly before the origin of the English Suites, could also have served as antecedants.