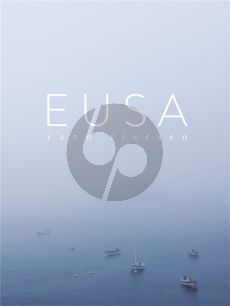 Each piece is related to a specific location on an island off the coast of Brittany called Ushant (‘Eusa’ in Breton) where I live. Ushant is more than just a home though — it’s a part of me. The idea was to make a map of the island and, by extension, a map of who I am. To begin with I chose ten locations on the island and made a series of field recordings at each of them. The pieces of music I then went on to write are named after these locations, and the sheet music for each piece is accompanied by a GPS coordinate and a photograph of the site taken by Emilie Quinquis. I decided that the music that makes up Eusa will not be available as an audio recording. However, the sheet music will come with a download code which will give you access to the field recordings I made, allowing you to perform the pieces alongside the sounds. For me it’s important that the music is played along with the field recordings for you to be welcomed to the island. Ushant is a part of me and it is as important to this music as the notes on the page.