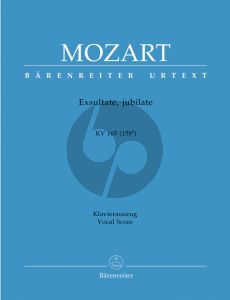 “In Italy nowadays this term (motet) is applied to a Latin sacred solo cantata consisting of two arias and two recitatives, concluding with an Hallelujah, and sung during the Mass following the Credo, generally by one of the best singers.” One composition matching this description is the solo motet Exsultate, jubilate, K. 165/158a, which Mozart wrote in Milan early in 1773 following the highly successful performance of his opera Lucio Silla.

In 1978, when the music manuscripts in Bavaria were being sorted and cataloged in a project sponsored by the Deutsche Forschungsgemeinschaft, a set of manuscript parts for a previously unknown second version was discovered in the town parish church of St. Jakob in Wasserburg am Inn. The music and text of the concluding Alleluja movement were written out by the Salzburg court bassoonist and copyist Joseph Richard Estlinger (c. 1720–1791), who frequently worked for Mozart and his father.

The vocal text of this Salzburg manuscript departs from that of the Milan version in the first aria and in the recitative. It was entered in a different hand. The Salzburg version of the text is clearly related to the feast of the Holy Trinity. There is much evidence that this version was sung for the first time in the Dreifaltigkeitskirche on 30 May 1779 (i. e. Trinity Sunday) by the Salzburg male soprano Francesco Ceccarelli during a service mentioned by Nannerl Mozart. On that day Leopold and Wolfgang Mozart, together with Ceccarelli, were invited to the church’s vicarage at midday. The additional text underlaying of the first aria enabled the solo motet to be employed for the Christmas service as well.