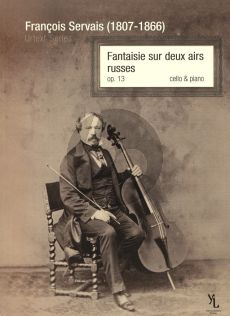 Servais had a close relationship with Russia, Ukraine, and Poland, and his compositions reflect this. He first went to Russia in 1839–40.

According to Peter François, this is when Servais composed and performed Fantaisie sur deux Airs Russes for the first time. This Fantaisie is based on the songs Соловей (The Nightingale, 1827) by Aleksandr Alyabyev

(1787–1851) and Красный сарафан (The Red Sarafan, 1838) by Aleksandr Varlamov (1801–48). Servais dedicated this Fantaisie to Count Mikhail Vielgorsky (1788–1856), a Russian official, composer, and patron of the arts. Mikhail’s brother Matvey, an amateur cellist, was the dedicatee of Servais’s Morceau de Concert, Op. 14, and Felix Mendelssohn’s Cello Sonata No. 2.

Our edition is based on the first edition published by Schott 1854. The Richault edition was also consulted for the solo cello part. The sources were graciously provided by the Servais Society.