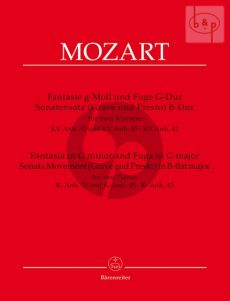 Of Mozart's many fragmentary works, it is the 'Requiem' which stands out, but there are many other fragments in his large compositional output which can ideally be used as a basis for a completion. In the case of these two completions for two pianos, the editor has drawn on thematically suitable fragments from Mozart's piano solo repertoire and has arranged them for two pianos. In this way completions are achieved which are largely based on authentic material. The result of this creative work is two new, highly effective concert works for two pianos, offering a valuable addition to Mozart's two existing works for this combination. The editor took Abbé Maximilian Stadler's sensitive completion of Mozart's fragmentary 'Larghetto and Allegro in E-flat major for two pianos' (K. deest ) as a model for his completions. Urtext of the New Mozart Edition Completions of Mozart fragments in a practical performing edition Foreword (Ger/Eng) and numerous facsimiles Valuable addition to Mozart's repertoire for two pianos.