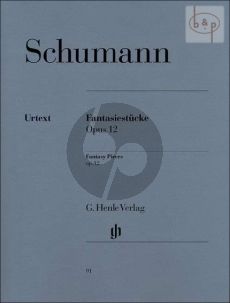 'With humor, 'slow and tender, 'extremely brisk': the very expression marks of the op. 12 'Fantasy Pieces' illuminate their musical universe, a kaleidoscope of ideas and moods. This revised new edition presents not only the eight original pieces, but also an appendix containing a ninth piece that Schumann excised during the final stages of publication. Several of the composer's friends, including the work's dedicatee Robena Ann Laidlaw, played some of op. 12 in public before it appeared in print. Later the work achieved rapid and widespread popularity. Perhaps the greatest compliment came from Franz Liszt, who excitedly wrote to the composer, 'Your 'Fantasy Pieces' have captured my interest in an extraordinary way. I play them truly with delight, and Lord knows there are not many things of which I can say the same.'