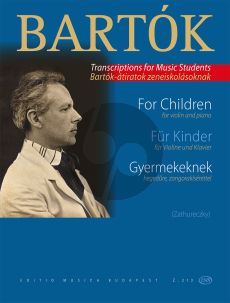 Béla Bartók composed his four-volume series comprising short pieces for beginner pianists, For Children, between 1908 and 1910. It consists of folksong and nursery song arrangements; the first two volumes utilize Hungarian music and the latter two are of Slovak origin. Bartók revised the series during the last years of his life (1943 to 1945). This collection contains easy arrangements of ten pieces from For Children for violin and piano; they can either be played separately or one after the other as a suite. These arrangements are by the legendary violinist Ede Zathureczky (1903-1959), who regularly gave concerts with Bartók during the 1930s.