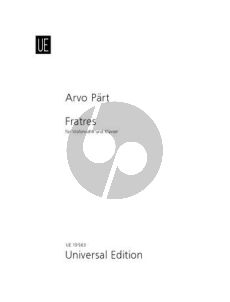 Fratres (original setting for violin and piano) was commissioned by the Salzburg Festival and premiered on August 17th, 1980 at that very place (violin: Gidon Kremer, piano: Elena Kremer). Composed in Pärt's very own 'Tintinnabuli'-style, this piece allows many different settings because it is not bound to a specific klangfarbe (tone color).

'The highest virtue of music, for me, lies outside of its mere sound. The particular timbre of an instrument is part of the music, but it is not the most important element. If it were, I would be surrendering to the essence of the music. Music must exist of itself … two, three notes … the essence must be there, independent of the instruments.' (Arvo Pärt)