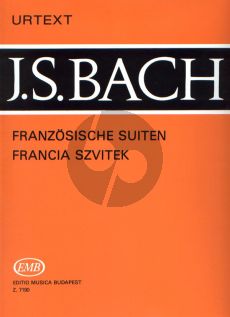 The most important and only autograph source of the French Suites, the Klavierbüchlein für Anna Magdalena Bach (1722) contains the first three suites in fragments only, and the sixth not at all. This is why the numerous copies which have come down to us, are of special significance. Among the copies of major importance is the manuscript which for a long time had been attributed to Bach, and which comprises the first for suites in full (Deutsche Staastsbibliothek, Berlin) as well as the copy by Gerber (1725-26) and the second volume of the Klavierbüchlein für Anna Magdalene Bach (1925). A few manuscripts originating from the circle of Bach's pupils should also be added to them.