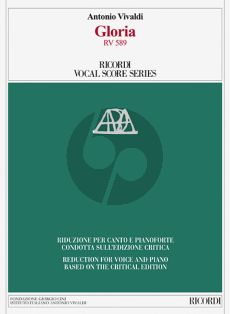 The present reduction derives from the critical edition of the score published in this catalog in 2002 (PR 1362). Although it is not possible to establish with certainty the time and the occasion for which it was composed - between the end of 1716 and beginning of 1717 - the Gloria RV 589 is the best known among the works Vivaldi wrote on this subject, enough to be considered the Gloria by Vivaldi.The critical edition is based on the only source available, the autograph full score now kept at the National University Library of Turin, Codex Giordano 32. It restores the famous Vivaldi text based on the revised criteria by the Committee of theCritical Edition. The volume includes a synthetic introduction of the historical context and a choice of the critical Notes to the musical text.