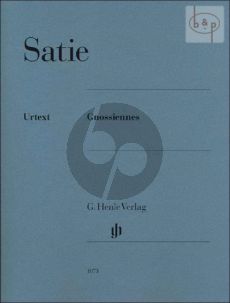 Like the "Gymnopédies", the "Gnossiennes" also allude to ancient Greek traditions. Perhaps inspired by the World Exhibition in Paris in 1889, Satie made use of oriental ornamentation. With his subtle intuition for musical tendencies that were "en vogue", he combined exotic elements with influences from cabaret music and, of course, his own ideas to create something very new. Several of the "Gnossiennes" take one by surprise on account of puzzling fragments of text between the lines of music. According to Satie they were not supposed to be read aloud but to create a secret link between composer and player - a creative challenge, which we are passing on to present-day musicians in our Urtext edition.