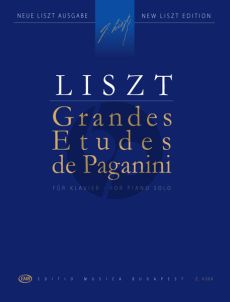 Liszt would not have become the artist we know, had it not been for Paganini. In turn, Liszt’s absence would have made the history of music and musical performance very different. Hence, it is no exaggeration to say that the 1832 concert at which Liszt heard for the first time the ''Devil’s Violinist'' play was of historic importance. Following this Paganini epiphany, Liszt emerged renewed from his career crisis of several years and soon found his own voice as a composer. At the same time, he progressed to become the most influential piano virtuoso of all time. Liszt's Grandes études de Paganini, based on Paganini’s capriccios, are one of the fruits of this exceptional encounter. Their significance is attested by François-Joseph Fétis, the prominent critic, who commented on the first version, ''There! the creation of the Piano - one did not know until now what it was.''

The present edition of the Paganini Studies is based on the New Liszt Edition, complete with a new preface, critical notes, and a facsimile reproduction