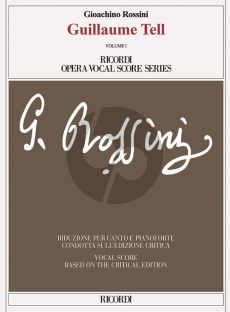 With Guillaume Tell Rossini finally offered Parisian audiences an original opera in French. Into its historical panorama (based on the play by Schiller) he wove pastoral elements, patriotic deeds, and superbly drawn characters. He responded imaginatively to the challenge of creating a work for the French Opéra without abandoning his Italian roots, integrating the bel canto lyricism and formal refinement of Italian opera with the declamatory immediacy and scenic splendour (particularly in the extensive choruses and ballets) of French opera.

Carefully written, harmonically daring, purged of melodic ornamentation, orchestrally opulent, Guillaume Tell represents a final purification of Rossini's style. The standard editions of Guillaume Tell all derive from the score printed in 1829 by Troupenas, the publisher who had acquired the rights to the opera even before it was finished.

Study of the autograph, of other manuscript sources (particularly those at the Bibliothèque-Musée de l'Opéra in Paris), and of the various documents relating to the first performances has resulted in a critical edition differing substantially from that handed down by tradition. It includes music heretofore unknown, which reflects changes introduced by Rossini during the course of rehearsals. As the basic text, the critical edition offers a theatrically functional reading, incorporating the corrections effected by the composer after trying them out onstage.

The critical apparatus and appendixes contain material that, although discarded by Rossini himself, nevertheless permits an accurate understanding of the genesis and history of this grandiose work.