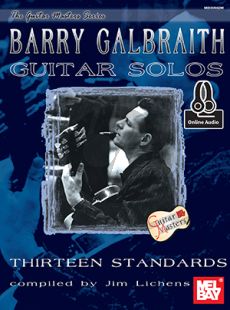 Barry Galbraith was one of the best jazz guitarists of the 1950's. He was also a fine music reader who would write out his own arrangements of standards for his students. Both his playing and his writing are very straightforward. This book takes thirteen of Barry's rough, hand-written arrangements and adds chord symbols, left-hand fingering, and tablature. The companion audio was recorded by John Purse. Also included in the book are quotes about Barry from many other famous musicians, a 7-page article on Barry by his son Don, an obituary by George Russell, and numerous pictures of Barry at different times in his life. Audio download available online. 56 pages.