Edited and realised by Lionel Salter 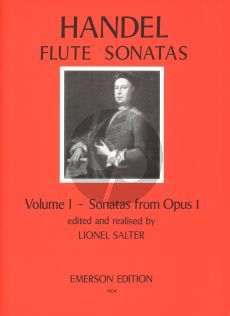 George Frideric Handel (1685 - 1759) was a German-born, British Baroque composer famous for his operas, oratorios, anthems and organ concertos. Born in a family indifferent to music, Handel received critical training in Halle, Hamburg and Italy before settling in London (1712), and became a naturalized British subject in 1727. He was strongly influenced both by the great composers of the Italian Baroque and the middle-German polyphonic choral tradion.

Of the seven sonatas in this edition, five were composed between 1724 & 1726 and first published by John Walsh of London in about 1731. From Handel's autograph manuscripts, it seems clear that only Op.1, No.1b (HWV 379) was intended specifically for the transverse flute but it is known that four (HWV's 360, 362, 365 & 369) were written for recorder and basso continuo.