Homage to Castelnuovo-Tedesco. An Anthology of Contemporary Music for Guitar - Album 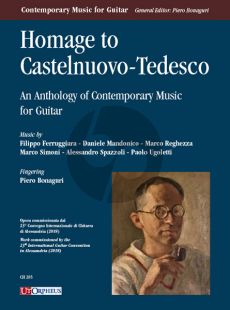 I am particularly happy about the publication of this volume, the project of which has been supported by the International Guitar Convention in Alessandria, marking the fiftieth anniversary of the death of the great Italian composer Mario Castelnuovo-Tedesco. This is a musician to whom all guitarists owe a great deal (and not just guitarists) since he wrote some of the most beautiful and widely performed music of our repertoire.

The pieces collected together in this volume share the freedom and artistic sincerity shown by Castelnuovo-Tedesco (“insobornable servidor de la verdad artistica”, as he was described by Andrés Segovia), showing, furthermore, that it is still possible nowadays to have a living and continuing relationship with European musical tradition, without the necessity for a programmatic severance.
In particular, I would like to point out in this respect how some of these pieces have been written by very young composers, Filippo Ferruggiara and Daniele Mandonico, who have been working on this project together with their teacher, Paolo Ugoletti, from the Conservatory in Brescia.

Another characteristic common to these pieces is that of nearly always going back to forms and procedures dear to Castelnuovo-Tedesco and sometimes taking an idea from one of his melodies. Thus, Marco Reghezza, born in 1968, agreed to complete the rough draft of one of the Appunti (the final unfinished work of Castelnuovo-Tedesco), called “Il Malinconico”. Daniele Mandonico’s piece on elevenths also refers to the Appunti, written as though to continue the original series of “Appunti” on intervals which went as far as tenths. The same applies to the chromatic “Appunto” by Filippo Ferruggiara which, in the other piece of his in the collection, “Ricordi”, could refer to Castelnuovo-Tedesco’s American period.

Marco Reghezza, in his Sonatina, and Alessandro Spazzoli are inspired by several themes included in the collection of piano pieces Evangélion, while Paolo Ugoletti agreed to write a ‘greeting card’ on the name of this Composer, using the same procedure as that adopted many times by Castelnuovo-Tedesco. Marco Simoni, the only Tuscan composer in this group, goes back to a Gregorian Eastertide theme which may refer to the love of Medieval music and culture often shown by Castelnuovo-Tedesco. An example of this is the Passacaglia sul tema del “Dies Irae” and the Cantico per una statuetta di S. Bernardino di Niccolò dell’Arca.

My thanks go to the composers who joined the project and to Diana Castelnuovo-Tedesco for her valuable collaboration. (Piero Bonaguri)