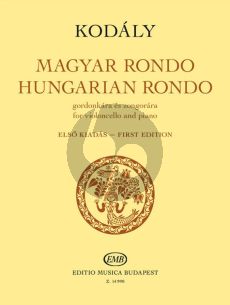 Hungarian Rondo was composed by Zoltán Kodály in December 1917, drawing on material from the incidental music he had written for Zsigmond Móricz's play Pacsirtaszó (Skylarking). The rondo form is shaped out of four new-style Hungarian folk songs and an instrumental dance melody. Kodály prepared the piece in two somewhat different versions, one for two clarinets, two bassoons and string orchestra, and the other for cello and piano. The orchestral version received its first performance in Vienna on 12 January 1918 at a "historical concert" organized by the War Ministry of the Austro-Hungarian Monarchy. The cello version was premi?red by Miklós Zsámboky and Ottó Herz at the Budapest Academy of Music on 4 November 1927. Neither version appeared in print in the composer's lifetime. The version for string orchestra was edited in 1976 by Ferenc Farkas and István Máriássy (and is distributed as a hire material under the order number K-1). The cello version appears here in print for the first time. The publication is based on the composer's surviving manuscript and a contemporary manuscript copy of this. The fingerings are by the editor.